The Curzon’s history has been intertwined with Clevedon’s for over 100 years. Unlike many cinemas built in the heyday of early silents and Hollywood, the Grade II listed building has always been a cinema, never closing its doors to film-goers.

Purpose-built in 1912 by local entrepreneur Victor Cox, The Picture House, as it was called then, opened 5 days after the Titanic disaster, with a fundraiser for relatives of the victims.

The neo-classical architecture, the tin panelling that decorates the interior, and the detail of the striking staircase to the balcony and boxes is the reason for the Curzon’s Grade II listing. Threatened with closure in 1996, the cinema was saved thanks largely to local support, and now flourishes under the ownership of the community.

This building has survived two world wars and the dawn of the digital age: and is the oldest, continually running, purpose-built, independent cinema in the country, (with one of the longest descriptors!)  entertaining audiences from 1912 to the present day.

Victor Cox, sculptor and monumental mason, submits plans for a purpose-built cinema and work begins at the end of the year at the western end of the current site.

The cinema, called “The Picture House”, opens with a matinee to raise funds for the relatives of those lost in the Titanic disaster. Admission is 3d, 6d and 1/-

The original building seats 200 people and has mirrored double doors at the entrance. The projector is gas illuminated. 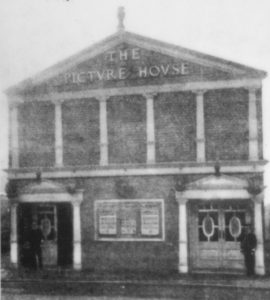 The building is enlarged, a sliding roof is installed and electricity is connected – all without missing a showing.

The hand-cranked projectors are motorised.

Albert Type’s mews at the eastern end of the site, formerly used for horse-drawn cabs, comes onto the market. Victor Cox promptly seizes the opportunity to acquire the site and extends his prosperous cinema. 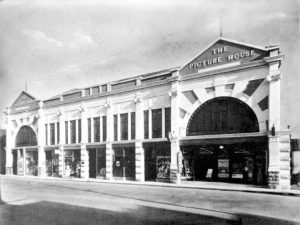 The rebuild is complete. The ornamental stonework comes from Victor Cox’s own yard in Old Church Road, and the bricks and tiles from Sidney Keen’s brick yard in Strode Road. During the whole period of rebuilding and changeover the nightly programme is never cancelled.

A sound-on-disc system is introduced for the screening of short films. Victor Cox’s stepmother, Blanche Howard, a professional singer, sometimes goes on stage to open proceedings with a song. 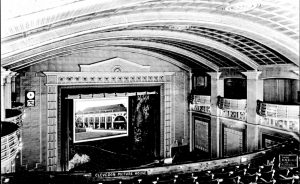 The first  ‘talkie’ to be shown is “The Grand Parade” (1930) Pathe starring Helen Twelvetrees, Frederick Scott and Russell Powell.

The café foyer’s large, semi-circular stained-glass window is shattered when a bomb fractures the gas main at the bottom of Hillside Road. Private William Wraith, an East Lancs. Infantry serviceman, standing outside the cinema when the bomb fell, was the only fatality in Clevedon as the direct result of enemy action during the war.

The name is changed to “The Maxime”

The Maxime is sold to the Cleeve Cinema Company, which owns a small circuit of cinemas, and the name is changed to the “Curzon”.

The theatre boxes are closed and box fronts removed

The projection room is returned to its original position at the rear of the stalls, the balcony closed and a false suspended ceiling installed. The last film to be shown from the ‘upper’ projection box was “Cabaret”.

The cinema is taken into administrative receivership.  A campaign begins, led by Jon Webber who in 1978 had successfully led the campaign to purchase the Rio cinema in Dalston. 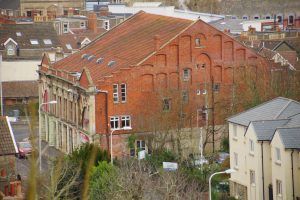 Grants from North Somerset Council, and Clevedon Town Council with funds raised locally, allowed the cinema to be bought back and the Curzon – Clevedon Community Centre for the Arts is established as a charity with a trading arm, Curzon Community Cinema Ltd.

A Heritage Lottery Fund grant of £320,000 is awarded to make urgent repairs to protect the interior of the building.

A short-lived exhibition opens on the top floor, displaying our cinema memorabilia and collection.

A new café/bar, Teatro Lounge, opens at the back of the cinema building, bringing a new source of revenue to the Curzon.

Work starts to restore the Curzon Roof. With a cost of over £600,000, grants from the National Lottery Heritage Fund; Reaching Communities; Garfield Weston; The David Medlock Trust and Clevedon Town Council – and a hugely successful community campaign which raised £120,000 alone, the Curzon’s roof, which had been leaking for decades, is finally being restored.

for the first time in 108 years, the Cinema closes its doors to the public as the Coronavirus Pandemic reaches across the world.

work to the roof is completed and the false ceiling, put up in the 1970s is finally removed to reveal the ceiling, balcony and full proscenium after 50 years… 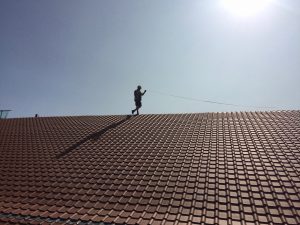 the Cinema opens for 2.5 weeks, before the government calls once again, for closure. After a brief opening again in December, in January 2021, the country again goes into Lockdown. The impact on the cinema is perilous, as grant after grant is applied for to keep afloat over these months. Staff are kept on, on furlough and the cinema waits for the story to continue…

A fundraising campaign is launched to re-open the Balcony, for the first time since 1972 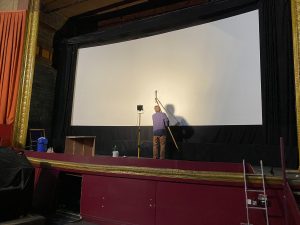 Be the first to hear about upcoming events at Curzon!

We use cookies on our website to give you the most relevant experience by remembering your preferences and repeat visits. By clicking “Accept All”, you consent to the use of ALL the cookies. However, you may visit "Cookie Settings" to provide a controlled consent.
Cookie SettingsAccept All
Manage consent

This website uses cookies to improve your experience while you navigate through the website. Out of these, the cookies that are categorized as necessary are stored on your browser as they are essential for the working of basic functionalities of the website. We also use third-party cookies that help us analyze and understand how you use this website. These cookies will be stored in your browser only with your consent. You also have the option to opt-out of these cookies. But opting out of some of these cookies may affect your browsing experience.
Necessary Always Enabled
Necessary cookies are absolutely essential for the website to function properly. These cookies ensure basic functionalities and security features of the website, anonymously.
Functional
Functional cookies help to perform certain functionalities like sharing the content of the website on social media platforms, collect feedbacks, and other third-party features.
Performance
Performance cookies are used to understand and analyze the key performance indexes of the website which helps in delivering a better user experience for the visitors.
Analytics
Analytical cookies are used to understand how visitors interact with the website. These cookies help provide information on metrics the number of visitors, bounce rate, traffic source, etc.
Advertisement
Advertisement cookies are used to provide visitors with relevant ads and marketing campaigns. These cookies track visitors across websites and collect information to provide customized ads.
Others
Other uncategorized cookies are those that are being analyzed and have not been classified into a category as yet.
SAVE & ACCEPT