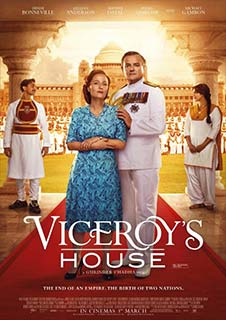 British rulers of India. After 300 years, that rule was coming to an end. For 6 months in 1947, Lord Mountbatten, great grandson of Queen Victoria, assumed the post of the last Viceroy,
charged with handing India back to its people. Mountbatten lived upstairs together with his wife and daughter. Downstairs lived their 500 Hindu, Muslim and Sikh servants.
As the political elite took their seats to wrangle over the birth of independent India, conflict
erupted throughout the House and a catastrophic decision was taken with global repercussions. Partition – the decision to divide India and create the new Muslim homeland of Pakistan – led tothe largest mass migration in human history.
The film is deeply personal to the director whose own family was caught up in the tragic events that unfolded as British rule came to an end. Her film examines those events through the prism of both a marriage – that of Louis and Edwina Mountbatten  and a romance – that between a young Hindu servant, Jeet, and his intended Muslim bride, Aalia. The young lovers find themselves caught up in the seismic end of Empire, in conflict with the Mountbattens and with their own communities, but never ever giving up hope