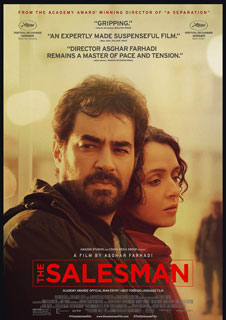 Award-winning director Asghar Farhadi (A Separation) returns with the 2017 Best Foreign Language Film Oscar winner The Salesman, a characteristically taut drama exploring how unexpected cracks can form in the foundations of a seemingly happy marriage.
The future looks promising for amateur actors Emad (Shahab Hosseini) and Rana (Taraneh Alidoosti) as they prepare for opening night on their production of Arthur Millers Death of a Salesman. However, when dangerous work on a neighbouring building forces the couple to leave their home and move into a new apartment, a case of mistaken identity sees a shocking and violent incident throw their lives into turmoil. What follows is a series of wrong turns that threaten to destroy their relationship irreparably.
Winner of the Best Screenplay and Best Actor awards at the 2016 Cannes Film Festival, Farhadis study on the potent power of pride, guilt and shame treads the line between arresting drama and revenge thriller with masterful ease.