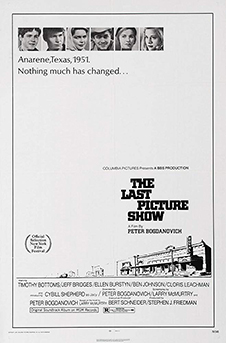 Released in 1971 to critical acclaim and public controversy, and featuring a talent-laden cast led by young Jeff Bridges and Cybill Shepherd, The Last Picture Show is a more bitter than bittersweet drama about growing up and winding down in the dusty nowhere town of Anarene, Texas during 1951-52. Unusually shot in black and white while the rest of Hollywood was going psychedelic in 1971, it’s an interesting contrast with the rock ‘n’ roll nostalgia of American Graffiti (the films share a key moment in which the boy who is leaving town gives a precious car to his stay-at-home friend and both make oblique references to Vietnam). It visits a recent past already nostalgic for a heroic Western era and discovers that whatever was wonderful has already passed these teenagers by.