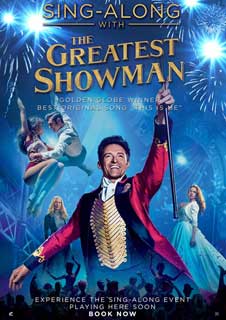 Inspired by the imagination of P.T. Barnum, The Greatest Showman is an original musical that celebrates the birth of show business and tells of a visionary who rose from nothing to create a spectacle that became a worldwide sensation. With hit songs like The Greatest Show, This is Me and A Million Dreams, and the irresistable charisma of it’s cast which includes the all singing, all dancing Hugh Jackman, Zendaya and Zac Effron, this big screen spectacular continues to steal the hearts of millions all around the world, five years after it’s release.

With songs this catchy it’s impossible not to join in, so we are showing the special sing-a-long version which will bring up the words on screen during the songs, so you can belt out the hits alongside the cast with pride.

Come down at 6pm early for some fun in the bar before this very special sing-a-long version of the hit musical. We have a couple of surprises in store!

Classic films at the Curzon are celebrating 110 years of the Curzon this year.