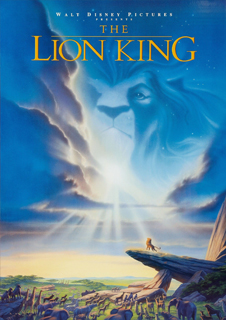 Disney’s classic animated musical with its legendary songbook is our Seaside Cinema film on Saturday afternoon. The Lion King presents the story of one lion cub’s journey to adulthood and acceptance of his royal destiny. Simba begins life as an honoured prince, the son of the powerful King Mufasa (voiced, of course, by James Earl Jones). The cub’s happy childhood turns tragic when his evil uncle, Scar (voiced by Jeremy Irons), murders Mufasa and drives Simba away from the kingdom. In exile, the young lion befriends the comically bumbling pair of Pumbaa the warthog and Timon the meerkat, and lives a carefree jungle life. As he approaches adulthood, however, he is visited by the spirit of his father, who instructs him to defeat the nefarious Scar and reclaim his rightful throne. Borrowing elements from Hamlet, classical mythology, and African folk tales, The Lion King tells its mythic coming-of-age tale with a combination of spectacular visuals and lively music, featuring songs by Elton John and Tim Rice, and a score by Hans Zimmer.

This screening is on the Salthouse Fields and doors will open at 1pm. Come down early and grab some lunch from a variety of delicious local food stalls. This is an outdoor event so please check the weather forecast beforehand and dress appropriately. If it rains the show will go on. Only in the case of extreme weather, such as dangerously high winds will the screening be cancelled. For comfort bring your own seats and picnic blankets, and please NO glass bottles. We will be raising money to restore our balcony so look out for our volunteers with our buckets, anything you can give is appreciated!