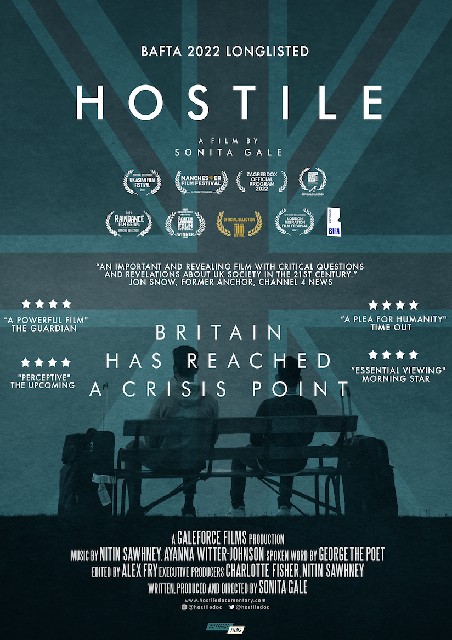 Hostile is an award-winning feature-length documentary written, directed and produced by BAFTA-longlisted filmmaker Sonita Gale. It focuses on the UK’s complicated relationship with its migrant communities. Told through the stories of four participants from Black and Asian backgrounds, the film reveals the impact of the evolving ‘hostile environment’ – a term used by the UK government in 2012 to illustrate the atmosphere they wanted to create for migrants, with the intention of provoking them to leave of their own accord.

The film explores how the lives of international students, members of the Windrush generation and ‘Highly-Skilled Migrants’ have been affected. After decades of hostile immigration policies, Britain has reached a crisis point. With Brexit, the Points Based Immigration System and the Nationality Bill and Borders taking effect, the film asks: once the ‘hostile environment’ has targeted all migrants, who will it extend to next?

Sonita Gale is a British Asian writer, director and producer. Elevating the stories of migrants and marginalised communities is at the forefront of her work.

Sonita’s debut feature documentary as director, HOSTILE is an award-winning and BAFTA and BIFA-longlisted film exposing the ‘hostile environment’ for migrants living in the UK. Hostile has screened across the country at Picturehouse and independent cinemas, and has been selected for a number of international film festivals, including the UK Asian Film Festival, Melbourne Documentary Film Festival, Budapest Movie awards and Manchester Film Festival, ZagrebDox and many more. In 2021, the film debuted at Raindance Film Festival and was an official selection of Cambridge Film Festival, London Migration Film Festival, and the South London Film Festival, where it won the award for Best Documentary Feature.

We are proud to be showing Hostile as a satellite event of National Refugee Week. The film will be followed by a panel discussion on refugee life in the UK. Joining us for the discussion will be Sam Sayer and Dr Natasha Carver.

Sam Sayer has worked in the charity sector alongside asylum seekers and refugees for 20 years. She is a reporter and broadcaster based in Bristol.

Dr Natasha Carver worked as an immigration case worker for 10 years before becoming an academic specialising in migration. Her prize-winning book Marriage, Gender and Refugee Migration, explores upheavals to life after refugee migration.

Don’t worry about dinner as we will be serving up a delicious meal option from Houria, specially for this event. Feast Box tickets are available to buy along with your film tickets. As we need to know numbers before the night they will not be available to purchase on the day. Only 40 Feast Boxes will be available so please book early to avoid disappointment.

Houria is a Bristol based anti-slavery & anti-racism organisation, training & hiring female survivors of slavery in a Pan-African catering company.

Doors open at 6.30pm to give you time to relax and tuck in. We recommend getting here early to enjoy your meal as it may be difficult to eat in the dark whilst the film is on!