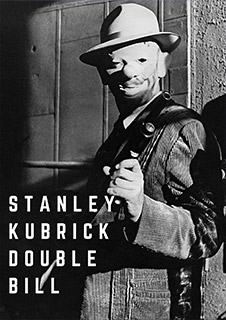 This early feature by a 26 year old Stanley Kubrick finds the young would be film director seizing the noir genre as an opportunity for visual experimentation and moody atmosphere, laying the groundwork for the following year’s The Killing.

The bare-bones plot concerns a washed-up boxer Davy Gordon (Jamie Smith) who lands in hot water when he steps between a dancer Gloria Price (Irene Kane) and her violent boss Vincent Raphello (Frank Silvera). Independently produced on a shoestring budget, Killer’s Kiss captures the seedy side of 1950s New York with vivid location photography and features a memorable action scene in a mannequin warehouse, the first of many great set pieces to come in Kubrick’s career.

Stanley Kubrick’s account of an ambitious racetrack robbery is one of Hollywood’s tautest, twistiest noirs. A classic heist film which can be ranked alongside John Huston s The Asphalt Jungle, Quentin Tarantino’s Reservoir Dogs and Michael Mann’s Heat.

The Killing is both a jaunty thriller and a cold-blooded punch to the gut. A quintessential film noir, still as brutal, thrilling and audacious as it was over six decades ago.

There will be a short interval between the films.

Classic films at the Curzon are celebrating 110 years of the Curzon this year!