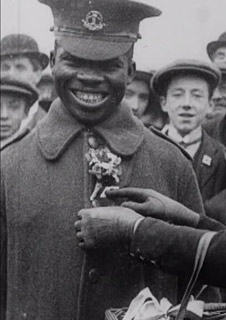 Bringing together films spanning 1901 to 1985 and taken from many different regions of the UK, it offers incredibly rare, little-seen and valuable depictions of black British life on screen.
Watch miners in the collieries of Edwardian Lancashire and Yorkshire; and soldiers from across the Empire joining the services to fight for King and ‘mother country’ in World War I. See rare colour footage of multi-racial Cardiff in 1957, a Nigerian wedding in Cornwall in 1964, and touching interviews with black school leavers in 1965; witness growing racial tensions on a Liverpool housing estate and in New Cross, London; communities in search of their roots and partying on the streets of Notting Hill during Carnival.
Revealing new voices from across a century of vast and turbulent social change in the UK, Britain on Film: Black Britain is not just an important educative tool – offering audiences the chance to explore stories of migration, community and the struggle against inequality – but also an opportunity to celebrate vivid black British life and culture on screen.