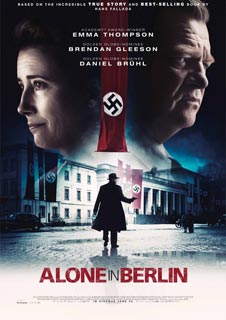 Trafalgar Releasing and Altitude Film Distribution, in partnership with Penguin Books,
Classic FM and The Telegraph, are proud to present the UK premiere of ALONE IN
BERLIN, live from The Imperial War Museum, on Monday 26 June ahead of the films
release on 30 June.
The special advance screening will take place from Londons world renowned Imperial War
Museum giving audiences around the country the opportunity to experience a private view
of some of the museums most famous exhibits, including the original Reichs Chancellery
Eagle, ahead of a screening of this extraordinary film starring Emma Thompson, Brendan
Gleeson and Daniel Brühl. The screening will be followed by a lively, inspiring and timely
discussion prompted by the incredible true story contained in the film of a couples
resistance to the Nazi regime. Our event participants will explore the themes of ‘people
power and how small scale protest can instigate a social movement, a theme also explored
in the museums current exhibition ‘PEOPLE POWER: FIGHTING FOR PEACE’.